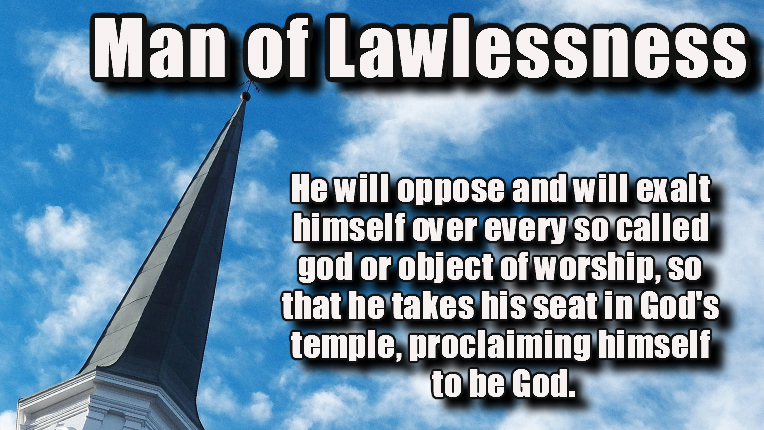 Now concerning the coming of our Lord Jesus Christ and our being gathered together to him, we ask you, brothers, not to be quickly shaken in mind or alarmed, either by a spirit or a spoken word, or a letter seeming to be from us, to the effect that the day of the Lord has come. Let no one deceive you in any way. For that day will not come, unless the rebellion comes first, and the man of lawlessness is revealed, the son of destruction, who opposes and exalts himself against every so-called god or object of worship, so that he takes his seat in the temple of God, proclaiming himself to be God. Do you not remember that when I was still with you I told you these things? And you know what is restraining him now so that he may be revealed in his time. For the mystery of lawlessness is already at work. Only he who now restrains it will do so until he is out of the way. And then the lawless one will be revealed, whom the Lord Jesus will kill with the breath of his mouth and bring to nothing by the appearance of his coming. The coming of the lawless one is by the activity of Satan with all power and false signs and wonders, and with all wicked deception for those who are perishing, because they refused to love the truth and so be saved. Therefore, God sends them a strong delusion, so that they may believe what is false, in order that all may be condemned who did not believe the truth but had pleasure in unrighteousness.

In his previous letter to the Thessalonians, Paul mentioned the return of Christ. He basically said, “Look forward to it. Knowing Christ will return is all you need to know about His return.” It is probable that many had continued speculation and were guessing or fixing dates. When the predicted day passed without Christ returning many may have questioned their faith.

This is Satan’s subtlety. He tries to do away with the hope of the resurrection and the Christ’s return. He attempts to undermine the promises that the day will come. Satan makes up all kinds of things about Christ’s return. He thereby causes the return to appear insignificant little by little. He cannot eradicate it but he can belittle it.

What does Paul mean by, “or that day will not come unless the rebellion comes first”? What is the rebellion? Here using various translations is helpful. The NKJV says, “Unless the falling away comes first”. The NASB says “unless the apostasy comes first”. This is consistent with many commentators. It is also consistent with those who understand the rebellion as a rebellion against God. Calvin and Wesley both understand it to refer to a falling away from the gospel. The Geneva Study bible says “that day shall not come, except there come except the be a  falling away first.” Thus, it seems to be general agreement that the day of rebellion refers to a rebellion against God. The rebellion will reveal the man of lawlessness i.e. the anti-Christ. But it is unclear who is rebelling. Is it in the visible church? Or is it a worldwide rebellion? In order for it to be worldwide, it would have to start in the church. So it is it safe to assume Paul predicts a general revolt within the visible church.

Luther and Calvin both pointed to the Pope as the anti-Christ, and for good reason. Even Roman Catholic historians agree the church and the papacy were corrupt at that time. Priests were openly involved with prostitutes. People bought and sold Church offices, including the papacy.

Paul is not referring to an individual but a kingdom that Satan has usurped. Satan sets up a seat of abomination in the middle of God’s temple. Calvin and Luther recognized this as the papacy.  Paul says, “so that he takes his seat in the temple of God, proclaiming himself to be God.” While the Pope does not actually claim to be God himself, he claims for himself godlike powers. As an example, the Pope claims the ability to forgive sins. He may grant indulgences and papal absolution. Remember only God can forgive sins.

Your reaction to what you just read may be either relief or anger. You may feel relief you are not Roman Catholic. Or you reaction may be angry that I would claim the Pope was the anti-Christ. In case you are in the first case. Let me anger you are well.

Read Paul again. Paul is saying Satan will set up a seat of abomination in the midst of God’s temple. This occurs not only in the papacy but also occurs in many evangelical churches. Yes as I said the anti-Christ is not a single individual. Satan can reveal himself through many protestant pastors, not just the pope.

Many protestant pastors are acting as the anti-Christ rather than ministers of God. Let me give two quick examples. The first is the pastor of Elevation Church in North Carolina. Elevation Church’s claims to be “united under one vision. Elevation is built on the vision God gave Pastor Steven. We will aggressively defend our unity and that vision.”

The Crossing Church in Minnesota says “We are united under the visionary. The visionary here is Eric. The Crossing is built on the vision God gave Pastor Eric. And we will aggressively defend that vision. Now, what does it mean to aggressively defend that vision? That means we do church the way he wants us to do it…. We do it this way because we don’t want to argue with God. Eric is not God but he has a vision from God.”

These pastors have set themselves up as have all authority. They have usurped the authority of God.

What is restraining the anti-Christ? This is hard to understand. It seems to be personal and impersonal, “what is restraining” and “he who now restrains.” Whatever or whoever is restraining is under the God’s sovereign will. It is clear that behind the restraining power is the God’s will. The anti-Christ had not yet appeared to the Thessalonians. Yet, Paul warned them that he was already at work. They were not to let down their guard. We should we be on guard even more so today.

This passage concludes with a word of encouragement. God protects his elect.  The anti-Christ will have many false signs and wonders, yet, God protects His elect. Those who refuse to believe the truth will receive the judgment of further delusion. But, the God will preserve His elect.