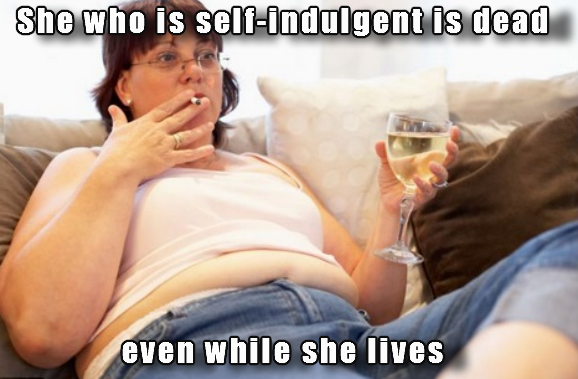 Honor widows who are truly widows. But if a widow has children or grandchildren, let them first learn to show godliness to their own household and to make some return to their parents, for this is pleasing in the sight of God. She who is truly a widow, left all alone, has set her hope on God and continues in supplications and prayers night and day, but she who is self-indulgent is dead even while she lives. Command these things as well, so that they may be without reproach. But if anyone does not provide for his relatives, and especially for members of his household, he has denied the faith and is worse than an unbeliever.

Let a widow be enrolled if she is not less than sixty years of age, having been the wife of one husband, and having a reputation for good works: if she has brought up children, has shown hospitality, has washed the feet of the saints, has cared for the afflicted, and has devoted herself to every good work. But refuse to enroll younger widows, for when their passions draw them away from Christ, they desire to marry and so incur condemnation for having abandoned their former faith. Besides that, they learn to be idlers, going about from house to house, and not only idlers, but also gossips and busy bodies, saying what they should not. So I would have younger widows marry, bear children, manage their households, and give the adversary no occasion for slander. For some have already strayed after Satan. If any believing woman has relatives who are widows, let her care for them. Let the church not be burdened, so that it may care for those who are truly widows.

Taking care of widows is a major theme in the Old Testament. Paul telling Timothy to care for widows was also echoed by James. (James 1:27) It was the concern which caused the appointment of Stephen and 6 others in Acts.  They were to fulfill the duty of  caring for the widows while the apostles preached. (Act6:1-4)

Paul appears to define a true widow as someone who has no one to turn to for help or support but to the church. They rely on God to provide. A true widow had no family. The church was not to replace the family. Families have the first obligation to the widows. This obligation falls on both the children and grandchildren. We are to love our parents second only to God.

The true widow is alone. She has nowhere to turn but to God. The church is to be the visible hand of God. The widow she has set her hope on God. Paul makes a distinction between those who are worthy to receive support and those who are not.

When Paul says, she who is self-indulgent is unworthy. She leads an easy and luxurious life. Paul condemns anyone who abuses widowhood to lead a life of idleness. Paul says she is dead. That is, she is useless, and does no good. We are to live to serve and not to be served. Paul here condemns laziness when he calls those women dead who do not serve.

Paul could not state the obligation to care for one’s family is any stronger. Those who do not care for their families have “denied the faith.” We serve God by serving others. We cannot serve God and lay aside our feeling for humanity. Not caring for our own families is open contempt of God and denying the faith. As if that is not enough Paul goes even further by saying anyone who forgets his own family is worse than an infidel.

But what about those parents who are cruel, brutal or abandoned their children? They are only biological parents. Paul is not referring to them. He is speaking only about those who provide guidance, instruction, and care.

Paul was careful not to create a class of indigent as we have today with entitlement programs. By enrolling the widow Paul refers to widows being employed by the church. They provide certain services for the church in exchange for material support. Those who can provide for themselves are not to rely on the church. Those who the church provides aid should also be employed. They should be employed in ministering to the poor, as far as the state of their health allows. Those who have ability are not to be a burden to others. The widows were not to receive aid so they may be lazy or indolent. They were to minister to the poor and the sick, until unable to do so.

Nothing is more becoming in a woman than being a good mother of a family. But there are those freed from the burden of a family who delight in having nothing to do. This Paul condemns.

Paul tells the younger widows to marry. Marriage is not always easy. Rarely do you find a man who willingly bears the burden supporting and leading a household. The reason is, it is full of obligations. Women too are reluctant to once again submit to the yoke of marriage.  But we are called to do us.

God values obedience. We are to follow our calling. Rather than be carried along by the desires of our own heart, we are to obey. This is the exact opposite of what the world teaches today. It is the exact opposite of the serpent’s message in the garden. Do what you want not what God wants. Be free! Following our heart is the foundation of all our sin.

When Paul tells the younger widows to marry, he does not tell them to indulge lust. Bearing children is more than procreating. He includes all the troubles and problems that go with bringing up children.

There are two principles Paul is providing. The first principle is families have an obligation to support each of its members. The church does not substitute for the family. Second, those who receive support from the church are to work in the ministry of the church if they are able.